Software development has a longer history than most people realize. The term "software engineer" dates back more than fifty years ago when the initial concept of computing first became a tangible reality. Over half a century ago, software development was more synonymous with computer programming; engineers primarily served as more of a high-level mathematician than an actual code writer, using advanced calculations and identifying algorithms to prompt machine responses.

Software engineering has changed significantly since its original launch in the 1960s. Today, Houston’s software developers and engineers have evolved far beyond elevated mathematicians, focusing instead on a multitude of complex digital components, including development processes, interface design, beta testing, and system maintenance. The rapid increase in required skills, coupled with global corporate and consumer demand, has significantly influenced salary expectations for these IT professionals over the years, beginning with the birth of the Internet.

Here's a glimpse into the trends that have helped define software engineer salary ranges in Houston over the last few decades:

The Rise of the Internet
In the mid-to-late 90s, the World Wide Web became a global event that created a huge demand for skilled and qualified IT candidates. The increase in need, combined with the shortage of qualified talent, prompted a significant upswing in software developer salaries from previous generations.

Two Recessions in a Single Decade
From the launch of the millennium until 2010, software developer salaries remained relatively flat across the country for a myriad of reasons. During this decade, IT candidates experienced an influx of jobs being outsourced overseas as a means for U.S. technology companies to save money. Additionally, the country endured two recessions: one in early 2001, as well as the Great Recession, which started in late 2007. Both of these economic downturns directly impacted venture capital investments and hiring opportunities across virtually all sectors.

The Last Decade: Software Engineer Salaries on the Rise
Over the last ten years, software engineers have experienced consistent salary increases. A recent Forbes article, The Best Paying And Most Sought After Jobs For New Grads And Freelancers Now, lists software engineers as having the second-highest entry-level salaries in the country. Additionally, according to Glassdoor.com, the national average for new engineers is around $81K a year. Glassdoor lists Houston software engineer salaries as slightly lower than the national average, coming in just under $65K a year.

Houston Hiring Managers Adjust Recruiting Efforts to Attract Leading IT Talent
This consistent upward trend in software engineer salary expectations is likely to continue for the foreseeable future. The steady influx of companies investing in information technology on a global scale, as well as consumers' increasing reliance on digital devices in their daily routines, increase the chance that software engineers will continue to serve as an invaluable technology commodity. As a result, Houston hiring managers have recalibrated their recruiting strategies to not only attract leading IT candidates but also maintain top-tier technical talent.

Beyond offering competitive compensation, companies will also have to provide other essential factors, such as robust benefits packages, upward mobility, and a dynamic work culture for IT hiring success with long-term results. Additionally, local companies will also have to stay on top of the many reasons why elite software engineers and developers leave seemingly good Houston IT jobs. Identifying triggers such as ineffective leadership, loosely outlined job responsibilities, and a perceived lack of corporate vision will all come into play as businesses strive to proactively combat internal disruption caused by high employee turnover.

Software engineers aren’t the only IT professionals experiencing salary upswings. Download InQuest Staffing’s Houston IT Salary and Hiring Guide to answer your questions about the local IT candidate terrain. Or, contact us today to speak with a member of our Houston recruiting and staffing team today! 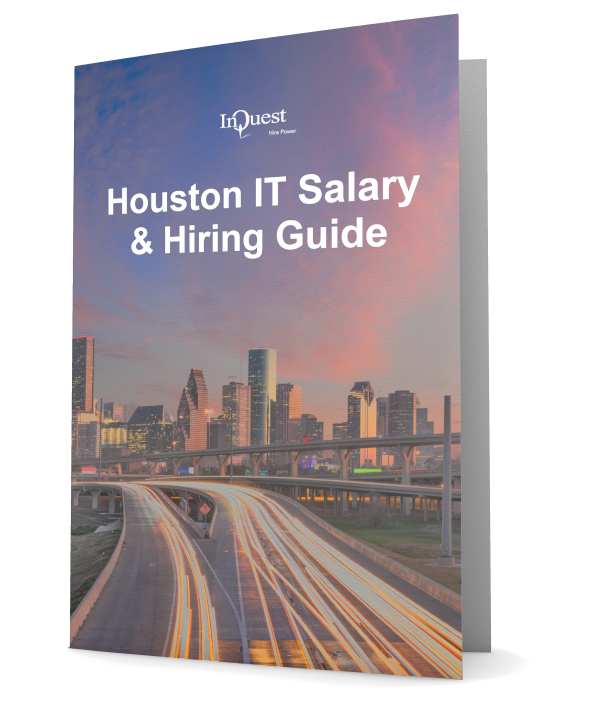 These Stories on Technology

Let us know what you think

Hiring Managers - Drop us a line

© 2020 InQuest Staffing. All Rights Reserved. Made with love by Orange Pegs.